How Cellphone Use While Driving Has Changed in America Since 2004

Jared Staver is a Personal Injury Lawyer based in Chicago, Illinois and has been practicing law for over 20 years.

Every day on America’s roads, there are more than 800,000 vehicles with a distracted driver behind the wheel. That alarming statistic—along with the sobering fact that in 2018, more than 2,841 people died due to distracted driving—is why lawmakers across the country continue to view cellphone use in cars as a public safety hazard.

Since New York became the first state to ban drivers from using a hand-held phone in 2001, the specifics of how—and when—to control cellphone use in cars have been debated in different states. In 2020, Idaho, Indiana, and Virginia became the newest states to pass bills prohibiting hand-held cellphone use. South Dakota did the same, but with some exceptions like holding the phone to their ear or using GPS navigation (if drivers aren’t typing in the address information).

Meanwhile, some states specifically ban logging onto social media sites, others define cellphone use by how many times you touch the screen to complete an action, and still, others impose stricter bans for bus drivers or law enforcement officers. Fines can range up to $275 and some states impose more serious penalties, like losing your license, for repeated violations.

Today, there is no state that has a blanket ban on all cellphone use for all drivers. But 24 states and the District of Columbia do have a ban on using hand-held devices, meaning drivers need to opt for hands-free and voice-activated commands when behind the wheel. Forty-eight states and D.C. prohibit text messaging of any kind while operating a vehicle.

Staver Accident Injury Lawyers, P.C. compiled statistics from the National Highway Traffic Safety Administration on cell phone use trends over nearly two decades as laws, technology, and driver awareness have evolved. Broken down by age, this data looks at how driving behaviors range over different generations. Distracted driving is especially dangerous for teens: They are the most likely to be texting at any given moment, more likely to be recorded driving while using a cell phone, and are most likely to die in a crash involving a distracted driver. 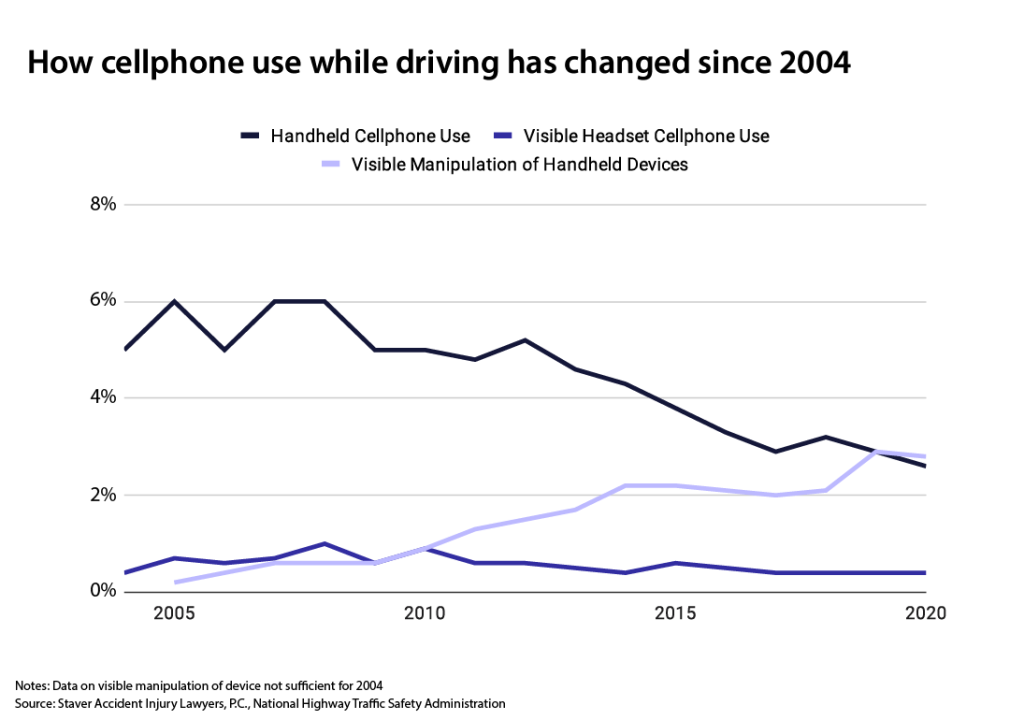 Cellphone Behavior While Driving Has Changed as Technology Has Developed

Hand-held cellphone use, or holding the phone to your ear while driving, along with wearing headphones are two driver behaviors that have seen significant declines since 2004. This may likely be due to the introduction of new technology in both phones and cars that allow for more seamless hands-free operation. It’s easier for drivers to take calls with both hands on the wheel.

However, visible manipulation of hand-held devices—when drivers can be seen tapping away on their devices—has risen steadily. As keyboard and flip phones have given way to touchscreen phones, it’s no surprise that Americans are less likely to put devices up to their ears and are instead constantly swiping their screens in their cars. 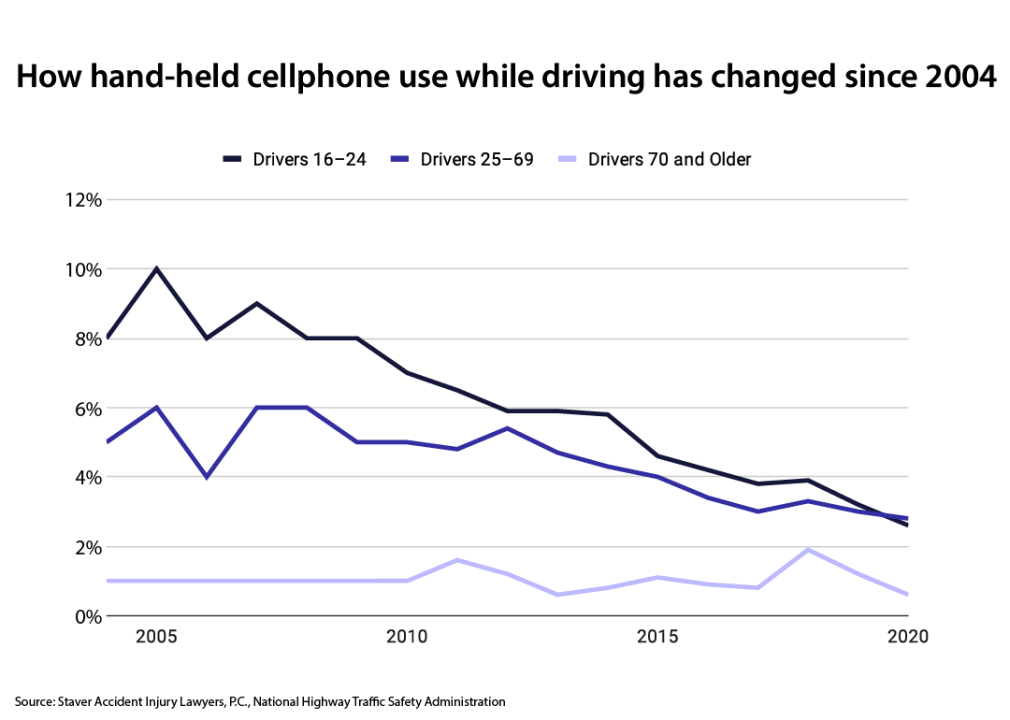 Fewer People Are Talking With Phones Up To Their Ears

Hand-held cell phone use could indicate drivers might be taking a call, checking voice messages, or giving voice commands, but the key is they have one hand on the device and only one hand on the wheel.

While in the early 2000s, teens and young adults were the worst offenders of hand-held cell phone use, only about 2.6% of young drivers were reported driving while using hand-held phones in 2020, compared to 10% in 2005. Built-in integrations in many cars now allow drivers to use voice commands more easily than in the early 2000s, facilitating phone calls without the driver even touching their phone. 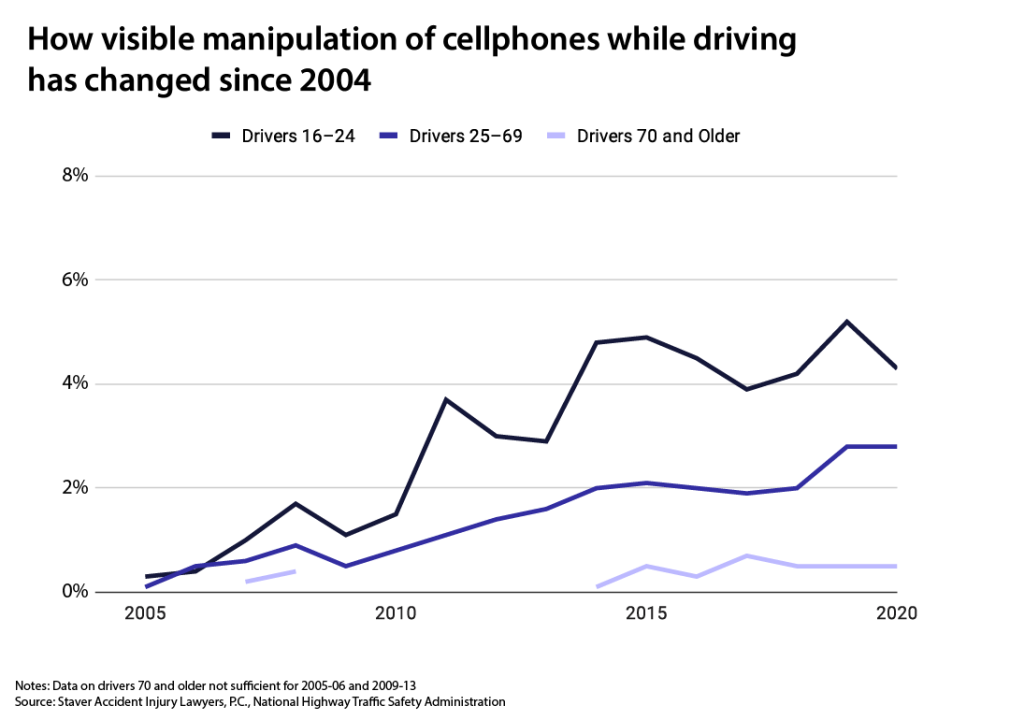 Even though texting while driving is the behavior most often associated with distracted driving, the rise of smartphones means we have many more reasons to look away from the road. Drivers have been visibly spotted setting up GPS navigation, using music streaming platforms, writing emails, or using thousands of other apps.

As holding a phone to your ear to talk becomes less common, scrolling around on phones has become more of a trend. Whether a phone is mounted to a dashboard or held in their hand, drivers can’t seem to resist tapping them—though not quite to the extent of hand-held cell phone use in the early 2000s. 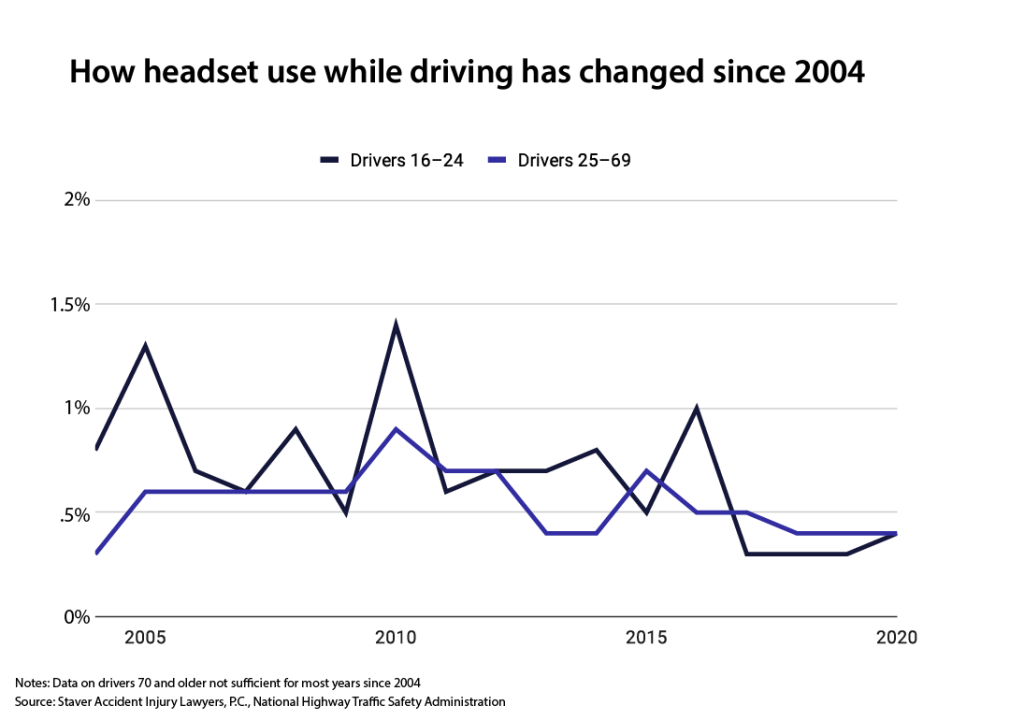 Wearing a headset while driving can make it harder for drivers to be fully aware of their surroundings and alert to problems or warnings on the road. However, most states don’t have laws specifically against wearing headphones or wireless earbuds while driving. It’s less common than other types of distracted driving and its prevalence hasn’t shown a significant decrease or increase among drivers since 2004.

When you’re fighting for maximum compensation, we know what it takes to get it.

When Do You Need Neck Surgery After A Chicago Car Accident?

How a Car Accident Police Report Supports your Insurance Claim

Serious injuries don’t happen on a 9-to-5 schedule, which is why we are always available to help if you have been hurt. Our team is available around the clock to provide the support you need.